Look! Up in the sky! No, really, we’ll wait. What’s up there? Well, in the big, cosmic scheme of things, pretty much everything. That’s a heavy concept to wrap your brain around, especially when you live in a state where anything more than 20 minutes away is considered a “hike.” Once you start measuring things in light years it really gets squirrely, but here’s the trick. The incredible, infinite wonder of the universe isn’t really as far, far away as you’d think.

If you don’t believe us, just ask the stargazers at the Frosty Drew Observatory in Charlestown’s Ninigret Park. For them, a trip to Saturn is easier than a trip to Warwick. All they need is a clear, dark night and that big, beautiful telescope of theirs.

“Every telescope has a strength and this one is fabulous for Saturn,” says observatory director Scott MacNeill. The telescope – a Meade LX200 Schmidt Cassegrain – is great for seeing the equatorial bands on Saturn, which are weather fronts within the planet’s atmosphere, the planet’s moons, and yes, those striking the rings are very clearly visible.

“It blows their mind. People see pictures on the web and they say, ‘That’s great, that’s Saturn,’ but I don’t think they’re really sure what to expect,” says MacNeill. And it’s true. The best thing about the digital age we live in is that all of the wonders of the world are there for anyone to see, but what they can’t ever prepare you for is what it’s like to see a marvel of the natural world with your own eyes (with a little help of course). “When they get that view – they’re not ready to process that. Everyone has a different first reaction. Some people laugh. Some people swear. Some people cry. I’ve been kissed!” 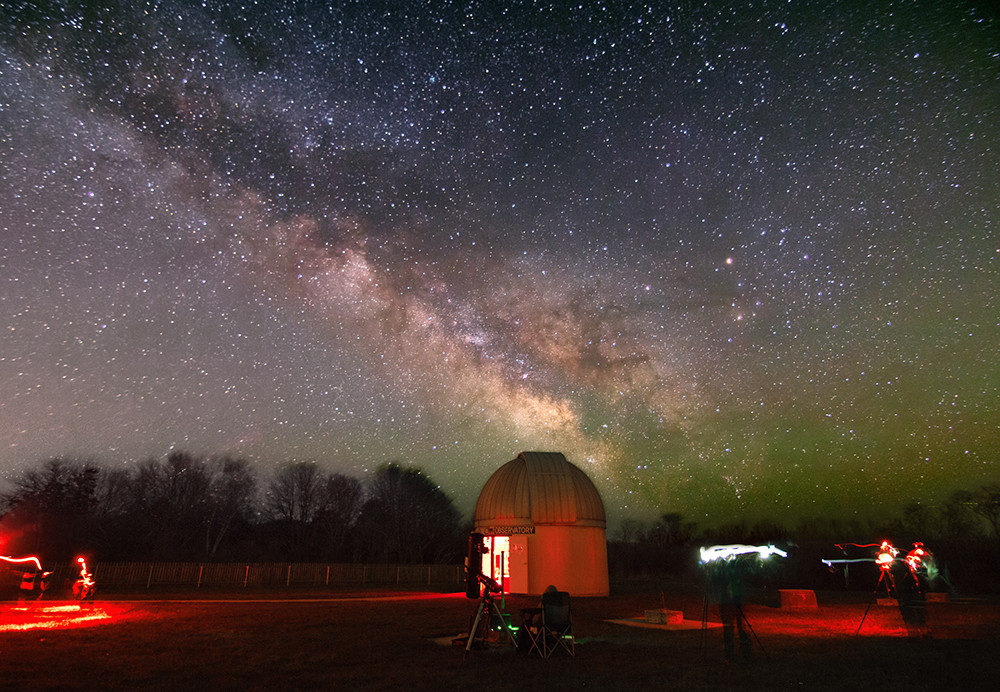 Frosty Drew sits in a wide-open park, surrounded by protected federal lands with nothing beyond but the big, wide Atlantic Ocean. What this means for stargazers is the right kind of darkness, a field of stars relatively unmarred by man-made light. You can even get a look at the Andromeda Galaxy – which will be in prime viewing over Rhode Island in October – with your naked eye. Andromeda, in fact, is the only object outside our own galaxy you can see without the aid of a telescope.

Speaking of galaxies, the Milky Way is a photogenic star full of them. Photojournalist Mike Cohea has been capturing the thick band of stars and nebulae – the galactic core – with his camera for over a decade, but in the last year and a half or so has attracted the attention of wide-eyed Rhode Islanders on Instagram – follow him @mikecohea if you aren’t already and prepare to have your mind blown – with his dazzling shots of our home galaxy captured over Trustom Pond Wildlife Refuge and Block Island.

“You don’t just see the Milky Way, but you see all of the planets, satellites, the International Space Station. There are a million other things to see out there,” says Cohea, who grew up an outdoorsy kid in the Pacific Northwest with appreciation for the treasures hiding in plain sight on a clear night. Ten years after moving to and falling in love with Rhode Island, he’s doing his part to share that wonder of discovery with the rest of us. “This place is really amazing. Everyone goes to the beach during the day then rushes back home, but stay out there. At night it’s a whole other scene.”

One scene in particular needs to be seen to be believed – a lovely long exposure of the Milky Way photobombed by a swarm of fireflies, their electric green lights trailing across and dotting the frame.
“I’ve never seen so many fireflies. It’s one of those moments where I have to remember that I’m a professional photographer and not [lose it],” he says with a laugh. Capturing these images requires late nights and a lot of patience, meaning a solid afternoon nap and a willingness to stand out in a field for hours in the dead of night, but the results speak for themselves.

Cohea also frequently turns his photographer’s eye to our nearest cosmic neighbor, the Moon. In particular, he specializes in time lapses of full moonrises and stunning stills of the moon over southern Rhode Island’s lighthouses and bridges. Using long telephoto lenses creates the optical illusion of the moon appearing larger than it does to the human eye. These shots require precise timing and positioning, often miles away from the earthbound foreground subjects. 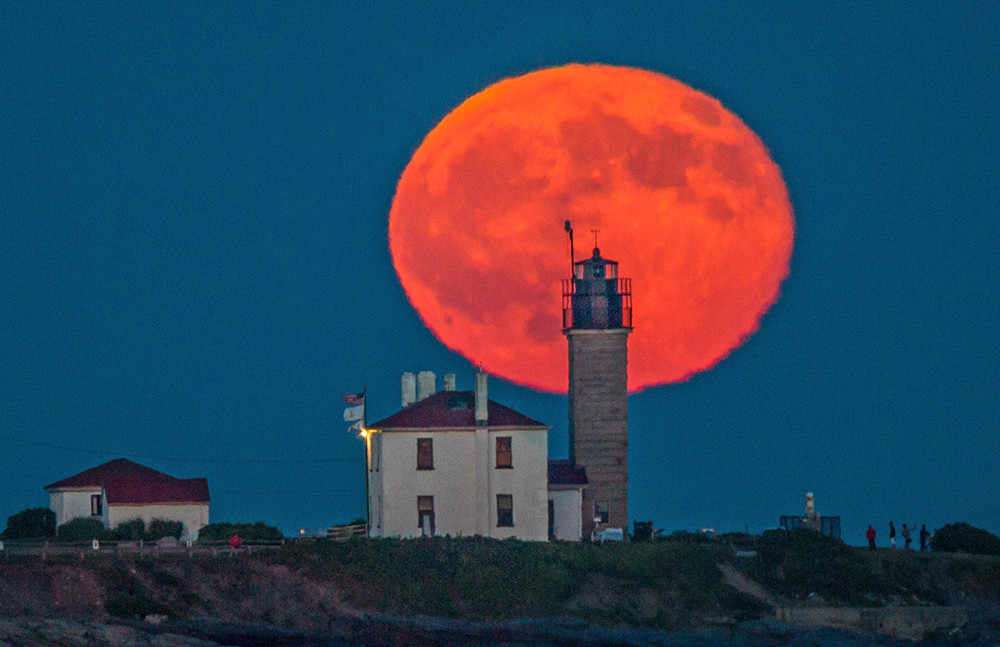 “I love sharing Rhode Island’s beauty,” says Cohea. “That’s one of the cool things about this. I think that state’s awesome, and it’s a great foreground.”

For Cohea, sharing something as big and distant and weird as the Moon or a faraway part of our galaxy in the same image of something as familiar as Beavertail or the Newport Bridge boils down to one thing – communicating to others that it’s all there, if we know where and how to look for it, and it’s ours to discover. That same spirit drives the men and women who work at Frosty Drew.

“We get some little Isaac Newtons,” says MacNeill. “[Kids that] come out and they’re thinking about orbital dynamics, planetary and stellar formation, and they ask questions. We try to tell every kid that’s between five and twenty years old that they’re part of an important generation. The first person to set foot on another planet is walking on Earth right now. They’re a kid, they probably don’t know it’s them, and that opportunity is available to anybody.

“When I see these Isaac Newtons walk through the room I sit there and say ‘This kid could be the one to go to Mars.’ Does he even know he has that chance? Does she even know she’s got that opportunity?”